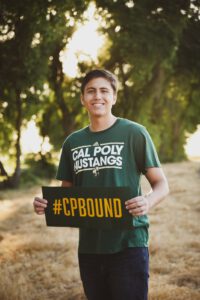 The recipients were chosen from a pool of impressive candidates, and their selection was based not only on academic achievement, and school and community involvement, but also how they have continued to demonstrate their faith and contribute positively to the community through service and volunteerism – both incredibly strong tenets of the faith-based education provided at St. Aloysius School.

This year’s scholarship recipients are Alyssa Zamora and Landon Poston.

Zamora is graduating from University Preparatory High School, where she was active in Mock Trial, Drama Club, and Christian Club. She has also remained a contributing member of the St. Aloysius parish, attending mass each week, often as a lector or altar server, and volunteering for Vacation Bible School.

Zamora also actively participated in the after-school “Panda Peer Tutoring” program, volunteered at a 6th Grade college info day at COS, organized a “cabaret” performance as the school’s drama club president, and wrote grants for the UPHS Theatre Program. Most notable to her, however, was her involvement with the Tulare Police Explorers Program, in which cadets participate in trainings and community service activities.

“The most important thing St. Aloysius taught me was hard work and self-advocacy,” said Zamora. “At St. Aloysius, teachers were always willing to lend a helping hand to anyone who needed extra instruction and greatly emphasized the importance of working hard to understand the material. I owe my achievements at University Preparatory High School to this ingrained work ethic, and I know for certain I will always take that mindset with me in the future.”

Poston is graduating from Tulare Western High School, where he was active in the Associated Student Body Leadership Program, including participation in its “Feed the Need” and “Soled Out for Kids” programs; and the Harvesting Hope Club, harvesting surplus produce from local farms, which was then donated to local food banks.

The most meaningful community service project to Poston, however, was assisting with the Tulare County Special Olympics. The excitement on the athletes’ faces as they competed and challenged themselves motivated him to continue supporting this organization throughout his college years.

Poston credits his strong faith with helping him overcome challenges, resolving conflict, and making difficult decisions. It also gave him the strength to remember he is not perfect and should show compassion – not only to himself, but also to others – as he and his peers navigated new high school experiences, sometimes making mistakes along the way.

“Having grown up with a small and tight-knit class through eighth grade, I entered high school already feeling comfortable asking my teachers and classmates for help,” said Poston. “I could lean on others for support, while also relying on my own independence that my St. Aloysius teachers fostered. St. Aloysius gave me a framework of tried and true habits for success, while allowing room for me to grow into the student and person I am today.”

Poston intends to pursue a career as an engineer in the Central Valley.